Bringing award-winning, original casino games straight to your computer, tablet and smartphone, Slingo Originals Software is one of the hottest gaming companies around. Slingo’s parent company Bear Group Limited, which is possessed by Gaming Realms PLC is listed on the London Stock Exchange.  If you are based in the UK and you are looking for something different and fresh, Slingo is what you need.

The company has been around for over 25 years and their top-performing restatements blend elements of slots and bingo. Their growing record of Slingo games is credited to their team of designers, which prides itself on innovative game design, containing intricate mathematical models, and puts player interaction at its core. This ensures that decision making and skills are incorporated in gameplay whenever possible. This way, they are able to offer an unparalleled gaming experience.

Slingo Originals Software is licensed and regulated by the Alderney Gambling Control and the United Kingdom Gambling Commission.

Try Slingo Originals Games at the following Bingo Sites below …

First-time depositors only (UK exc NI, 18+). Min deposit £10. Max offer £70 of Bingo Tickets. Pending Free Spins will be available once £5 of deposit funds have been wagered. All winnings will be credited to your real money balance. Promo code: KOZMO. Deposit balance is available for withdrawal at any time. Full T&Cs apply

Slingo boasts its own exclusive range of games. This means that players cannot get that Slingo experience anywhere else. From original slot gameplay to juicy 6-figure jackpots, to skill-based puzzles, this developer has a lot to attract fans of every nature.

Most of their games fall under the Slingo category – which is a clever element of slots and bingo combined and adapted into a variety of their creative games. Some of their games include:

This game is presented on a 5×5 grid that is quite familiar with most bingo gamers. The bets range from 50p to $100. Once you have made your first deposit, you are awarded 11 spins to score a Slingo. With each spin, five numbers are rolled and displayed at the bottom of the screen and the ones that match with the numbers on your grid are checked off. If you get five numbers checked off diagonally, vertically, or horizontally, you strike a win.

There are also the super wilds which award better. When you land on one, they check off any number on the grid regardless of the position. If you get three or more of these super wilds in a single spin, you get an instant cash prize. The game also has a bonus game which allows you more chance to score a Slingo. 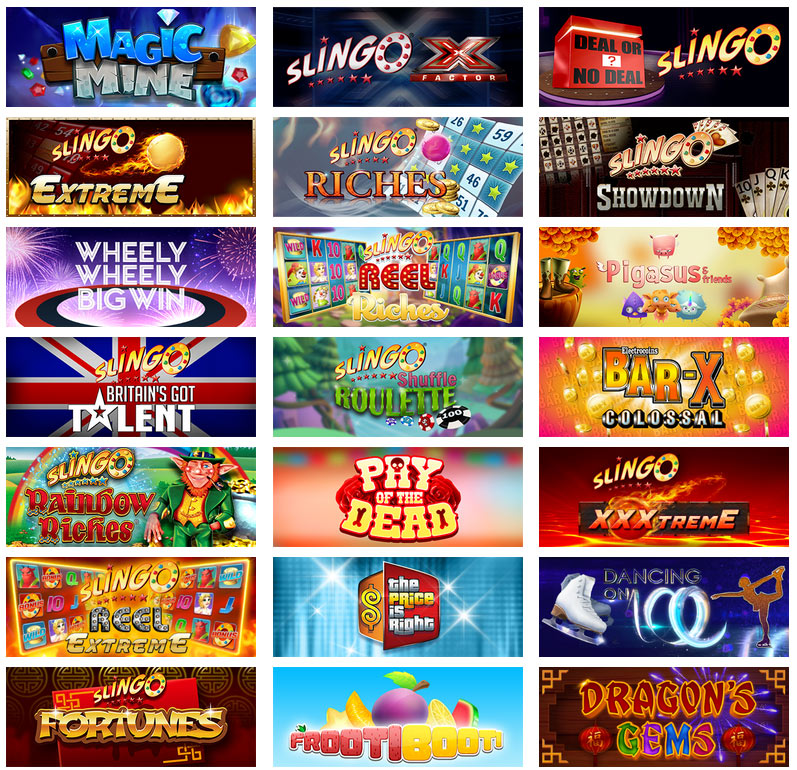 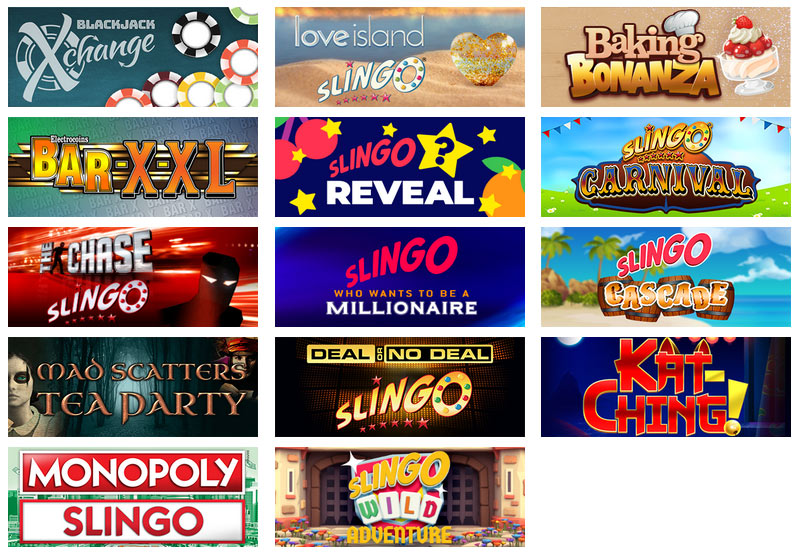 Slingo Extreme improves the classic Slingo game by offering extra spins, larger cash prizes, and faster gameplay. If you are lucky, you can win up to 500x your stake. The game is playable from 50p to $100. You start playing with 11 spins to try complete as many Slingos as possible. Cash is awarded for one line to a full house. You can grab wins from single coin symbols and three or more matching jokers.

The game also comes with a free spin symbol that gives you an extra spin when the game comes to an end. You must lookout for the devil symbol as it can block possible matches on the reels.

Slingo Boom is the only Slingo variant that you can play with other gamers. This is because it is based on the traditional bingo game but also has a unique and exciting Slingo twist. To start playing, gamers must choose the room they wish to play in. The Freebie Room allows you to play for modest prizes without wagering. The Star Room is where you can unlock big wins; the Party Room offers budget games, while the Gold Room has generous jackpots.

The aim of Slingo Boom is to match numbers that land on the reels with a number on your grid/card. Each game uses either a coverall or a special pattern. If you are the first player to mark off all the numbers that make up the pattern or all of the numbers on the grid if you are playing a coverall game, you win the full house prize.

Slingo Originals offers other games like Wheely Wheely Big Win, Pigasus, and Magic Mine. In Magic Mine, players match three gems to get real cash. The Wheely Wheely Big Win allows the classic roulette game more accessible to the casual player by adapting it into a fun and intuitive game. Pigasus feature as Red-Hot Respin bonus feature where players get the chance to buy an extra respin at a set coin value in an effort to activate the game’s lucrative free spins round.

Other games include Deal or No Deal Slingo, Slingo X Factor. Shuffle Roulette, Slingo Britain’s Got Talent, Slingo Showdown, Bar X Colossal, and Pay of the Dead.  They also offer a number of , slot, live casino and table games.

Slingo Originals provides games that can be played across all platforms including tablet or mobile devices. All games feature clear graphics and a seamless user interface.

Slingo offers a number of rewards to its users.  They have a two-level VIP scheme and once you reach the Platinum status, you will enjoy numerous perks like 10% cashback in real money, express withdrawals, invites to VIP events and birthday gifts.

We all love something different. Slingo Originals offers lots of original content that everyone will appreciate. From the innovate slots to the skill-based Magic Mine, and bingo rooms with a social incline, Slingo Originals has lots of stuff for all players.